What We Know About Jihadi John, the Infamous ISIS Executioner

The transition from shy schoolchild to notorious murderer is fascinating and heartbreaking. 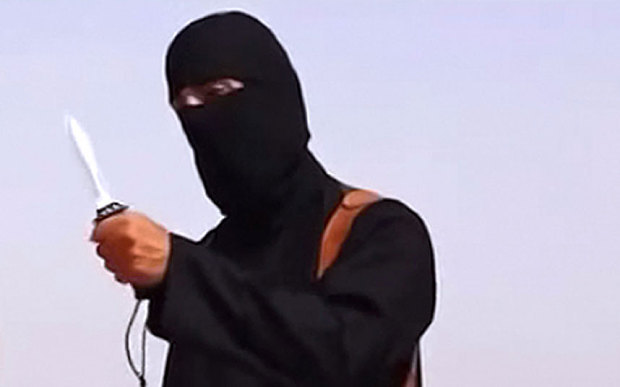 We now know the true identity of infamous ISIS executioner "Jihadi John," the 26-year-old man turned terrorist monster. Born Mohammed Emwazi to a non-extremist Muslim family, his transformation from shy school kid to radical killer didn't happen overnight. Here's what we know so far.
Childhood
Mohammed Emwazi was born in Kuwait in 1998 and moved to west London with his family six years later. He attended St. Mary Magdalene Church of England Primary School, where he was said to be a shy, quiet, and normal child who loved football, S Club 7, and The Simpsons. Classmates told CNN that he was a "down-to-earth person" who "spoke to everyone," regardless of religious creed.
His parents, Jasem and Ghaneya, are said to have been supportive to their five children, providing them with quality educations from prestigious schools. Jasem owns a taxi company, while Ghaneya is a homemaker. The family moved around a lot, and the neighbors who have come forward all seem to have thought the family was amicable.
While people have said Emwazi "worshipped occasionally at a mosque in Greenwich," the Telegraph reported that current worshippers at the mosque said he was "unknown," and may not have been a member at all.
The Telegraph recently reported that Emwazi's younger brother Omar appears to have been radicalized, citing Facebook posts that "voiced support for the radical Islamic cleric who inspired one of Lee Rigby's killers." None of Jihadi John's other siblings nor his parents have been linked to radicalization.
So, how did a kid who grew up in a middle-class, affluent family with no known deep-seated history of extremism (except for Omar, who is thought to have become radicalized years after his older brother) become one of the most notorious faces of ISIS? 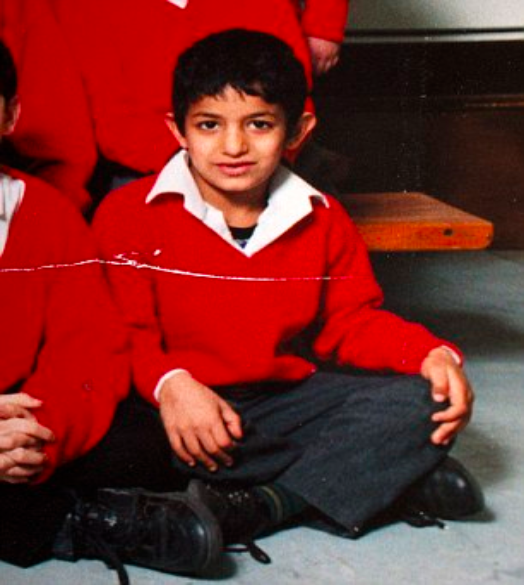 Mohammed Emwazi poses for a school photo. Daily Mail
Transformative Years
Emwazi became more religious as he grew older, although he didn't display signs of extremist behavior, one of his former teachers told Britain's Channel 4 News. Perhaps his shy nature helped conceal his changing mindset for a while, but his secrecy didn't last long.
According to the Telegraph, court documents state Emwazi was part of a local extremist group called "The London Boys," who were "involved in sending funds and equipment to Somalia for terrorist activities." Many of the group's members went on to become terrorist fighters in Syria, and one member, Bilal al-Berjawi, is now a top figure for the militant group al-Shabaab.
Peter Neumann, the director of the International Centre for the Study of Radicalisation at King's College, London, spoke with NBC about Emwazi's transformation from sweet schoolchild to heartless terrorist. Neumann noted that Emwazi was probably exposed to radical Islam while living in Ladbroke Grove where extremist ideals are popularized and imposed onto impressionable children and teens.
"I think he had connections that went very deep and very wide, and he would have associated with a lot of extremist people over a very long period of time," Neumann told NBC. "So he's not someone who was radicalized only because of the Syria conflict; he'd been part of the London scene for years before that."
College & the Years Leading to Joining ISIS
Emwazi attended the University of Westminster and graduated in 2009 with a degree in computer science. He was reportedly a good student, but he seemed to have been invested in a lot more than just studying while pursuing higher education.
During his time in school, Emwazi was introduced to a powerful extremist group. In an Op-Ed for the New York Times, activist and author Maajid Nawaz wrote that "the University of Westminster is well known for being a hotbed of extremist activity," and that "the university's Islamic Society is heavily influenced, sometimes controlled by the radical Islamist group Hizb-ut-Tahrir," which translates to "the party of liberation." Nawaz wrote while the group was radical, it "advocates for military coups, not terrorism, to achieve power," but still provides a solid foundation for anyone looking to grow more extreme. 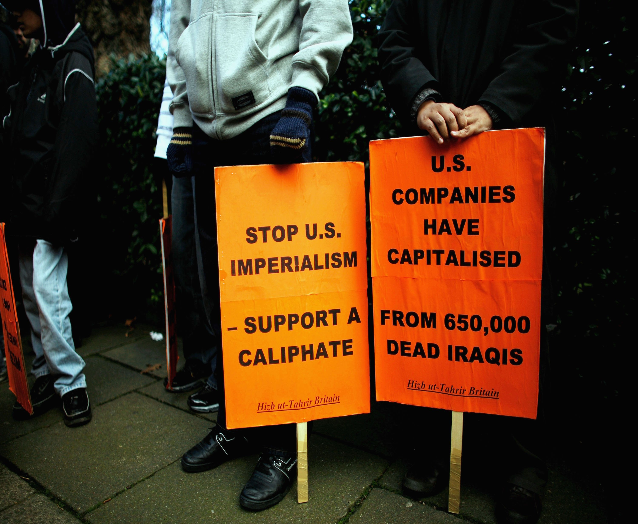 Hizb-ut-Tahrir protesters gather outside of the US Embassy in London, Daniel Berehuiak / Getty Images
After graduation, Emwazi and a few of his friends decided to go to Tanzania for a safari trip before getting married in Kuwait. Or, at least that's what Emwazi told an agent for MI5, the British intelligence agency after he was detained and transported to Amsterdam for questioning. The agent informed Emwazi that they had "suspicions he was trying to join al-Shabaab militants in Somalia."
Angered by the interrogation, Emwazi contacted CAGE, a group in Britain that strongly opposes the War on Terror and advocates for those who are profiled and mistreated because of it. In a recorded conversation"”which is now publicly available on CAGE's website"”Emwazi said MI5 questioned his feelings on 9/11 and a 2005 suicide bombing in London that killed over 50 people.
"Innocent people have died ... I think this is extremism," Emwazi said he told the MI5 agent. "We see the news, innocent people are getting killed, [the officer] started telling me, 'What do you think of 9/11?' I told him this is a wrong thing, what happened was wrong. What do you want me to say? If I had the opportunity for those lives to come back, then I would make those lives come back."
Emwazi later said that this interrogation ended his engagement, but it didn't stop him from going back to Kuwait to live with his relatives that September. According to the Telegraph, Emwazi traveled back and forth from London to Kuwait a couple of times before the British government made it nearly impossible for him to fly to Kuwait again.
Flash forward to 2013, and Emwazi was missing. While they couldn't yet confirm his whereabouts, police suspected Emwazi had gone to Syria.
From Mohammed Emwazi to Jihadi John
A former captive of ISIS told the Telegraph that Emwazi had joined the terrorist group in the northwestern part of Syria by July of 2013. But he didn't instantly become the beheading monster we recognize today.
In an interview with BBC, a former ISIS member who called himself Abu Ayman said Emwazi started out as a regular fighter without all of the celebrity and was actually quite the loner. According to Ayman, Emwazi rarely joined the other fighters for prayer and seemed stand-offish.
"He was cold," Ayman told BBC. "He didn't talk much. He wouldn't join us in prayer ... The other British brothers would say 'hi' when they saw us on the road, but he turned his face away. The British fighters were always hanging out together, but he wouldn't join them."
Perhaps it was Emwazi's disinterest in bonding with the others that allowed him to become so ruthless. Maybe it was the promise of luxury goods, like cars and weapons that won him over. Or, maybe it was an underlying insecurity that led him to crave more power. Whatever the reasoning, Ayman said ISIS had a team of psychologists that "know who to choose from the fighters and how to make them famous," even if there was seemingly "nothing special about Jihadi John."
And just like that, a monster was born.
Read This Next

J.K. Rowling Clapped Back Against Donald Trump For Criticizing The London Mayor After Terror Attack
Matt Manser | News
Share
Read This Next

1
The Story Behind That Touching "Peace for Paris" Art
Artist Jean Jullien never expected it to spread the way it did.

2
This Woman Has Survived 3 Terrorist Attacks In The Past Year
Let's see where she goes next so we don't go there.

3
J.K. Rowling Clapped Back Against Donald Trump For Criticizing The London Mayor After Terror Attack
The 'Harry Potter' author took down the president, and the internet loved it.
Advertisement
Read This Next

Thanks to Facebook, This Mother Was Reunited With Her Baby Following A Terrorist Attack
Joseph Porter | News

How America Has Changed Since 9/11
John Tyczkowski | Lifestyle

Enjoy Your Nap, But Be Aware Of The Pros And Cons
Kirk Pynchon | Science

During Paris Attacks, This Heroic Dog Inspired Millions
When tragedy strikes, heroes come in all shapes and sizes, and sometimes those heroes have tails.

How America Has Changed Since 9/11
Our country has changed.

Scientists Have Developed A 'Fish Maze' To Help Them Shed Light On Diseases Like Alzheimer's
A test of fish behavior in a maze has shed light on human degenerative conditions, heralding new hope for treatments.