The Only Beginner's Guide to Weed You Need to Read

Now that it's (mostly) legal, learn to toke like a champ! 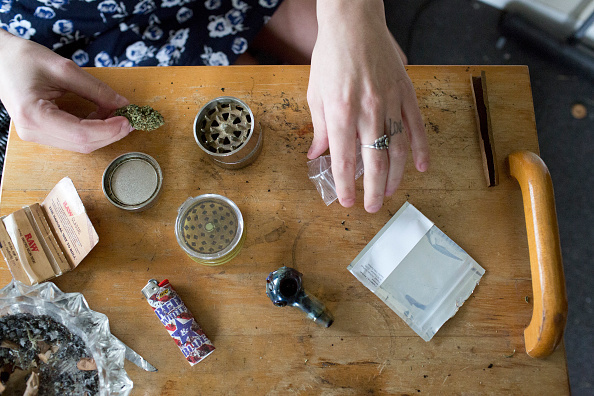 I know. You're highly excited. You live in a state where marijuana has been legalized for medical or recreational use. But DUDE! Before you rip that bong, roll a doobie or smoke your bowl, consider these five things about weed.

One of the first things I learned about weed is that there is more than one high. Sativas and indicas are the two main types of weed. Both strains get you high in different ways.

Sativas are mainly known for their "piney" smell and cerebral high. When you smoke a sativa, the high's effects are mainly felt in the head. Some people choose sativas to get their creative juices flowing. Others light sativas up to reach that happy, giggly high. Sativas often have large amounts of THC, the stuff that gets you high.

Indicas are mainly known for their deep colors and body high. Most of the "purple" strains of weed are indicas. When you smoke an indica, the high's effects are felt throughout the body. Some people choose indicas to relieve pain or if they need help falling asleep. Indicas have CBD, the stuff in pot often lauded for its medical benefits.

Hybrids of different pot strains also exist that blend the effects. Some dispensaries have a "house" blend. Often those are hybrids.

If it's your first time buying store front weed, you should probably start with a strain that's lower in THC. One of the easiest mistakes beginners make is buying the strongest strain out there and getting "too high". (Yes, this exists.)

The ABCs of weed

THC, or tetrahydrocannabinol, is the primary cannabinoid that gets you high. THC is also known as a pain reliever. On the other side, THC is responsible for the munchies and short term memory loss.

CBD, or cannabidiol, is the cannabinoid most cited for its medical use. CBD has helped relieve pain, reduce anxiety and even has antioxidant properties.

CBN, or cannabinol, is a cannabinoid mainly found in hemp products. No, you can't get high from smoking hemp.

CBG, or cannabigerol, is another cannabinoid that also has medical benefits. CBG has helped those with irritable bowel syndrome and glaucoma.

Everybody wants to get high,Giphy

First time taking an edible? DON'T EAT THE WHOLE THING AT ONCE. Many first timers make the mistake of gobbling down an edible and becoming overwhelmed by its effects. Some Colorado pot clubs now sell "rookie cookies" which have lower THC levels. Even regular pot users can go down if they aren't too careful. If the edible is bite sized, eat half, wait about 30 minutes then finish. For anything larger, eat a ¼ every 30-45 minutes.

You don't have to smoke to inhale

Vaporizing has really taken off recently as the technology gets more portable, sleek and cheap. Many turn to vaping to avoid the carcinogens that are released when you smoke. Others vape to avoid the smell from smoking. Some vaporizers work like little ovens, heating marijuana to the point that vapor is released. Others heat cartridges of weed concentrates like hash oil or wax.

An offshoot of vaping is dabs, in which a "dab" of hash oil or wax is placed on a red hot surface releasing vapor that is inhaled for a short, yet extremely intense high. No matter your pot usage, PROCEED WITH CAUTION especially if you're new to smoking pot or concentrates.

Just because you're high, doesn't mean you're an idiot

I don't think this gets mentioned enough, especially in the high of recent marijuana legalizations: Please be mindful of your surroundings, manners and laws. Don't be the one that pressures others to smoke. Always ask before smoking in other people's houses. Don't be the guy who ONLY talks about weed. Be mindful of your limits: you CAN get too high. Don't smoke in front of kids. (What's wrong with you?) Be wary of how you are if you're drunk and high. Respect people around you who might not like marijuana. Think of it like this: alcohol's legal and some people don't like drunks; tobacco's legal and some people don't like smokers.

This Is The Safest Way To Consume Cannabis, Scientifically Speaking
Lindsey Gentile | Science
Share
Read This Next

1
Helpful Tips for a First-Time Cannabis User
Thinking about dipping your toe into the cannabis world? Here's what you need to know.

2
These Moms And Dads Believe Smoking Weed Makes Them Better Parents
Would you puff puff at playtime?

3
This Is The Safest Way To Consume Cannabis, Scientifically Speaking
Even if it's legal, there's still a right and a wrong way to consume your favorite weed.
Advertisement
Read This Next

More College Students Now Smoke Pot Than Cigarettes, And This Is Why It Matters
Matt Manser | News

The Real Reason Marijuana Is Illegal
Something had to replace the alcohol ban.

A New Study Suggests Ways To Use Marijuana Safely
Legal weed is becoming the norm.

This Is How The Marijuana Industry Will Create More Jobs Than Manufacturing By 2020
Legal weed is projected to boost the economy and cut into the unemployment problem.