A heroic customer bought 23 pies just so a crying child behind him didn't get any. 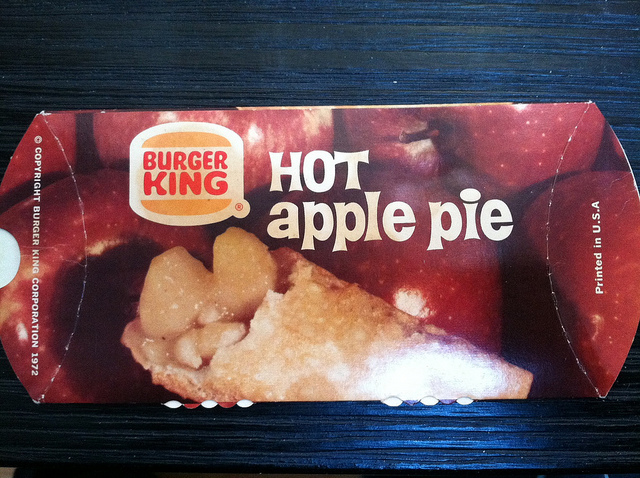 Loud, whiney children are the worst and I firmly believe they don't belong in most public places. I may cringe every time I hear some shrill kid screaming in a restaurant and silently judge his parents' child-rearing skills. I do daydream about the passing of a new law requiring mandatory sedation of anyone under the age of 10 on an airplane. But I've never actually retaliated against a pint-sized noise polluter.

That's why I have to give props to the unnamed gentleman  who recently bought all the apple pies at his local Burger King to punish the foul-mouthed brat in line behind him.

If you're thinking this man overreacted to cries of a child who probably doesn't know any better, think again. The youngster wasn't just noisily shedding tears"”he was being the epitome of bad.

"This kid was out of control, screaming, punching his mother, throwing around a Gameboy whenever something didn't go right in the game," our hero revealed on Reddit after the incident. But it was only after the little boy screamed "I want some F-ing pie" (using the actual word) that the man could no longer contain himself and asked the menace to settle down. The child's mother, who up until that point had been on her phone ignoring her obnoxious son, then got up in the man's face and said he doesn't know anything about her child and better mind his own business.

This made the gentlemen even more ticked off and rightfully so. Not only is this kid a terror, but his mom sucks too! So he decided to, in his own words "ruin their day" by ordering all of the apple pies that the restaurant had in stock at the time"”which was 23 to be exact.

Having exacted his revenge, the man simply took off. As he was walking out, he overheard the mother asking, "what do you mean you don't have any pies left? Who bought them all?" to the cashier. That had to have felt pretty great.

Unfortunately, the man's account of the event on Reddit ends there, so we don't know how the kid reacted to the news. I think it's safe to assume a lot of hysterical rage was involved and there's a good chance he murdered his mother when they got home. Of course, that's just speculation"”but what we do know is the kid definitely didn't get any "F-ing pie!" It might seem like a small victory, but for anyone who has ever fantasized about giving some loud, spoiled brat something to really cry about"”this man is an inspiration!

This Pie Looks Delicious, but Its Ingredients Can Get You Sued
Stories

1
There's Something Disgusting In McDonald's, Burger King And KFC Drinks That'll Make You Never Want To Drink There Again
Need help quitting fast food? This should be all you need.

2
This Pie Looks Delicious, but Its Ingredients Can Get You Sued
Derby pie may be delicious, but disputes over the use of its name have resulted in several lawsuits.

3
21 Creative Pies That Leave Us Wanting Seconds
Clap your hands (and your fork and knife) together for these 21 next-level pies.
Advertisement
Read This Next

An Elephant Finally Freed After 50 Years in Captivity
Lifestyle

This Is Why People Hate Spring Breakers
Cassandra Tucker | Lifestyle

Things That Annoy Massage Therapists The Most
Try not to stress out the folks that are trying to help you relax.

Snapchat Is Going To Let You Record Longer Videos Now But There Is One Annoying Catch
As with any good thing, there always is a catch.

This Is How You Know You Need To Get A New Roommate
Warning: You may also be the annoying one.