Lawyer May Be Guilty of a Lot More Than Photo Fraud

On top of her being a photo forger and a total space case, Svitlana may also be a scam artist. 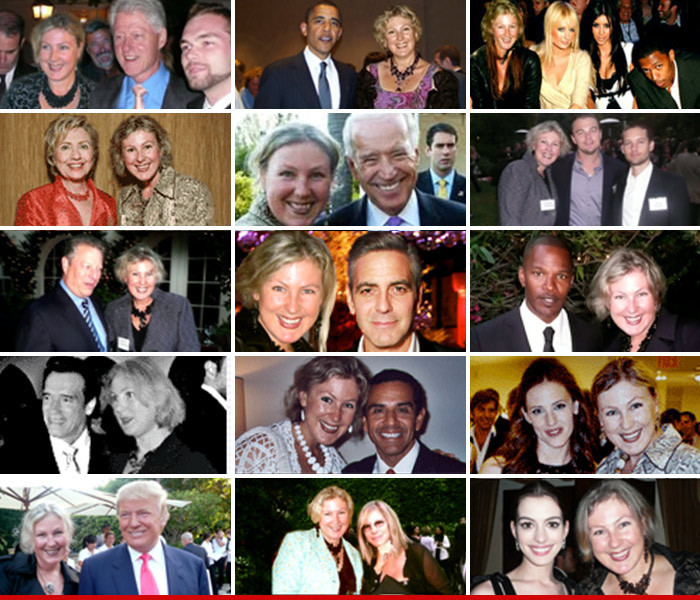 Would you hire a lawyer based on how many celebrities they've taken a picture with? The State Bar of California thinks you would.
That's why Svitlana Sangary, a Los Angeles based civil lawyer, currently faces a six-month suspension from practice. You see, Svitlana had posted dozens of pictures of herself hobnobbing with the rich and famous on her business Website. The numerous party pics showed the Ukrainian born attorney hanging out with celebs like Hillary Clinton, Barack Obama, George Clooney and Anne Hathaway "” just to name a few! The only problem was, the pictures were Photoshopped.
And I don't mean Svitlana airbrushed out a few imperfections. She used the photo editing software to straight-up superimpose herself into already existing pictures of movie stars and politicians to make it look as though she's got a ton of famous friends "” at least that's what the State Bar believes. So based on their ruling of the pictures as being fake, a State Bar Court judge recommended that her legal license be temporarily revoked, as the doctored photographs constitute `false advertising.'
On one hand, the punishment makes sense. If Svitlana were in some other line of work, her use of Photoshop would just be kind of sad, but because she is a lawyer, it is somewhat immoral. Posting such photographs "” Photoshopped or not "” is obviously meant to imply that the person in them (Svitlana) is very well connected. The way they are presented, the page alluded to the possibility that the celebrities may have been her clients. Who wouldn't want to use the same lawyer as George Clooney?
When I first heard about this strange legal scandal, I really wanted to be on Svitlana's side. The false advertising accusation made sense, but didn't seem entirely fair. The page on which the photos appeared had absolutely no text to accompany them. Svitlana never explicitly stated that these were her clients or even her friends in writing "” so technically she wasn't lying about anything when it came to her legal services.
So I reached out to her via email and asked if she'd like to comment on the situation. I wanted to give Svitlana a voice and an opportunity to defend herself. I hoped she'd respond with some strong arguments in her defense, woven into an articulate statement.
Well I did get a response from Svitlana, but definitely not one I had expected.
After communicating with Svitlana over email, as well as doing some additional research about the way she does business, I think there may actually be a couple much better reasons to suspend Svitlana from practice than her allegedly 'false' advertising.
For one, Svitlana's commentary on her situation was, for lack of a better word, a bit strange. She still appeared to deny that the images are fake even though they had already been proven as Photoshop creations by a judge. "Nothing in my life is more valuable to me than realization of the fact that I was able to come all the way from being an impoverished kid in Ukraine to a major political and charitable donor in California, and able to socialize and take pictures with the people I've always admired," she wrote. Svitlana even mentioned that she still has the photos on her digital camera and is happy to show them to me "” but if that's the case, wouldn't that be something she'd have already presented to the Bar?
Other than that, Svitlana did not reference the accusations against her. Instead, she strung together a bunch of bizarre, "inspirational" catch phrases: "What to do when your world turned upside down? You stand your ground.  This is the best advice I can give to myself. I've heard white being called black, and black being called white. I've seen opportunities being turned into problems. I will turn problems into opportunities.  Fight fire with fire. Fight lies with truth. When life throws me lemons, I make lemonade, and enjoy it like champagne!"
So I probed a little further, hoping to get some feedback about Svitlana from actual clients. When I looked her up on Yelp, I was shocked to discover that on top of her being an accused photo forger and kind of a space case, Svitlana may also be a scam artist. All of the reviews gave her services a one star rating. "She took my case and talked with me for the first two days. Then she cashed my retainer check and I could no longer reach her. She didn't answer the phone or return my calls or emails. I didn't hear from her for nearly a month after this!" wrote one outraged user. The same person went on to say that Svitlana then sent him a $25,000 bill, even though she initially estimated his case to cost $3,500.
A different user stated that "Svitlana will lie about her experience and charge you a TON for her "research" and threaten to take legal action against you if you don't pay the over inflated bill." While another former client ranted, "Svitlana Sangary is nothing less than a crook. Like others who have reviewed her, I agree that she is DISHONEST and UNETHICAL."
If these allegations are true, it seems that Svitlana's conning of clients is the real problem the Bar should be investigating, rather than her Photoshopped celebrity pictures. When it comes to lawyers, the ethics of their actual practice are much more important than the ethics of their advertising.
We'll see if the California State Bar agrees when they officially determine the fate of Svitlana's legal career later this month.
--------------------

The views and opinions expressed within this article are those of the author.  They are not necessarily representative of Guff.com.

1
Can You Figure Out What's Wrong In These Pics?
The moment you see it...

2
20 Hilarious Photoshop Fails From Celebrities
Just a reminder that celebs aren't perfect and we are all just doing our best.

3
These People Asked The Wrong Guy For Photoshop Help
When asking for something, it helps to be VERY specific.
Advertisement
Read This Next

This Couple Actually Climbed Mount Everest To Take Their Wedding Pictures, And They Came Out Epic AF
Matt Manser | Awesome

This Guy's Picture Was Photoshopped In 18 Countries, And It Shows The Different Standards Of Beauty
Heidi Lux | Style

This Artist Photoshopped Kids Books and the Results Were Hilariously NSFW
Put these on your summer reading list!

This 19-Year-Old Came Up With The Perfect Solution To Fix Her Travel Photos
The best breakup hack ever.

This Couple Actually Climbed Mount Everest To Take Their Wedding Pictures, And They Came Out Epic AF
This California couple decided to say "I do"...to adventure.