Have Scientists Just Figured Out a Way to Speed Along the AI Takeover? 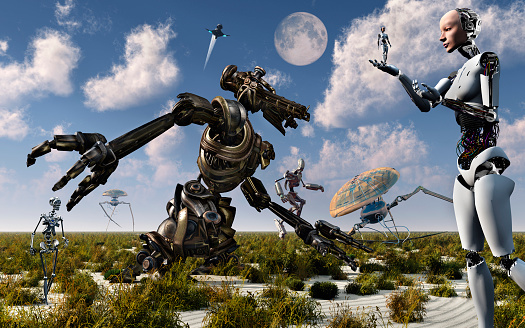 Mass extinction "” has a sort of apocalyptic ring to it, don't it? Because though extinction is a natural phenomenon, it should be moving much more slowly than it currently is. To be persnickety, extinction's "background rate" is supposed to knock off about one to five species a year. But scientists are seeing extinction at a factor of thousands of times that. Concerning? Oh, you betcha. That's an understatement.

But is there a silver lining to this impending thundercloud of doom? For the animals that have died out of human carelessness and senseless anthropocentrism...not really. But what about for robots, born out of human ingenuity and for the purpose of assisting humanity's journey into the future? The answer may surprise you.

Here's the skinny: recent research out of University of Texas Austin that emerged after a series of computer tests with robots finds that "focused destruction" can actually help natural selection in molding superior beings sooner. This means that cataclysms, like mass extinctions, actually help evolution trip along, rather than slow it down "” a big insight for biology,  but an even bigger one for the field of Artificial Intelligence.

Not with a bang, but maybe with a Big Bang... H. Armstrong Roberts/ClassicStock / Getty Images

Computer scientists Risto Miikkulainen and Joel Lehman plugged some bipedal robots up to a complex computer program called a neural network (one that mimics evolution and the brain) and started playing Mother Nature with their almost-human subjects. Their objective was to get the robots to figure out a way to walk on their own, without the programming of the scientists. So they came up with a long list of random mutations, traits that would or would not be helpful for walking. Then they blasted the robots with extinction time and again until they stamped out hundreds of generations (90 percent, to be exact) until...

So, not to be an alarmist or anything, but we should probably learn to walk away. And quickly too. The age of AI is on the near horizon.

Typically, the argument meant to allay worries over Artificial Intelligence goes something like this: "Well, someone's gotta program the bastards! And as long as that someone's us, we're in control! Ha!" OK there, Positive Percy. You can go join your buddies Optimistic Otis and Blythe Danner. Give the skeptics more room on the SpaceX shuttle off of this imperiled planet.

Because, if not before, this particular study complicates and undermines that cozy misconception, stripping it of any easeful attributes. A couple bees for your bonnet:

First, it shows that AI doesn't need a detailed and specific instruction manual in order to achieve the same desired ends "” which in this case was a particular type of behavior. It only needs the most rudimentary building blocks, some basic programming, and elementary direction, for it to be able to cross the finish line. You know that oft-debated notion that if you gave a monkey a typewriter and an infinite amount of time, it could crank out the collected works of William Shakespeare? Well, by this logic, robots only need a couple of keys, and a comparatively short amount of time to write the Book of Life.

Second, carbon-based lifeforms, like humans and dodo birds, take an exceptionally long time to randomize, mutate and evolve depending on their complexity and regenerative capacities. Their whole process of being born, reproducing, and dying can be lengthy and inefficient. Robots, on the other hand, when programmed using sleek and state-of-the-art computer technology, can do that whole process in seconds "” maybe even nanoseconds. Working in silicon is epoch-shrinking, and the durations of rapid change are minuscule by comparison. It's like Moore's law, which states that computing power doubles every two years, except think of a factor even greater than that, and apply it to AI. Moore's mutation, is what it should be called.

Could you just, like, not turn your head? Thanks.Courtesy of Warner Bros.

That said, there's an up and a downside to all this. The good news is that now that we know how to accelerate change in an AI population we can manipulate that crank to bring about better, faster and smarter robotic technologies. Could you imagine how long it would take, using this same model, to build a brain (the most complex composition in the universe) and endow some tin can with it? Most likely not long at all.

But that's the double edge of the sword right there. We can't even imagine what the repercussions of releasing such vast and fast-working intelligence could be on the universe, the world, ourselves...

And still "” and this isn't backtracking here, only layering "” if there is some kind of human mass extinction that's got its genesis in the AI proliferation and uprising, might that mean that the few homo sapiens that survive it will be more adaptable for the next phase of existence? What happens if the tables turn, and all of a sudden evolution equips the leftovers with a magic bullet? Hey, a kid can hope, no?

A Supercomputer With Artificial Intelligence Predicted WWIII, And It's Coming Sooner Than You Think
Lilyanne Rice | Technology

The Black Hole in the Center of Our Galaxy, and Other Cool Things You Missed in Science This Week
Pablo Alvarez | Science

The Mind-Blowing Answers Stephen Hawking Gave About A.I. and the End of Humanity
Alex Seedman | Science
Share
Read This Next

1
A Supercomputer With Artificial Intelligence Predicted WWIII, And It's Coming Sooner Than You Think
It's the end of the world as we know it. But really, it actually kind of is.

2
The Black Hole in the Center of Our Galaxy, and Other Cool Things You Missed in Science This Week
The Event Horizon Telescope is leading to unprecedented scientific breakthroughs.

3
The Mind-Blowing Answers Stephen Hawking Gave About A.I. and the End of Humanity
When it eventually does occur, it's likely to be either the best or worst thing ever to happen to humanity, so there's huge value in getting it right.
Advertisement
Read This Next

Steve Jobs Predicted The Downfall Of Apple When He Was Still Young
Young Steve Jobs was talking about other companies, but the situation he describes sounds awfully familiar.

Elon Musk's Latest Business Venture Proves He Might Be A Supervillain
Man and computer have always been separate...but that may change.

Two Computers Just Had A Conversation And It's As Bizarre As It Is Fascinating
This might be the weirdest thing you've seen all day.