Haunted Dolls You Would Definitely Never Want to Play With

These dolls are even more terrifying than Barbie's body proportions! 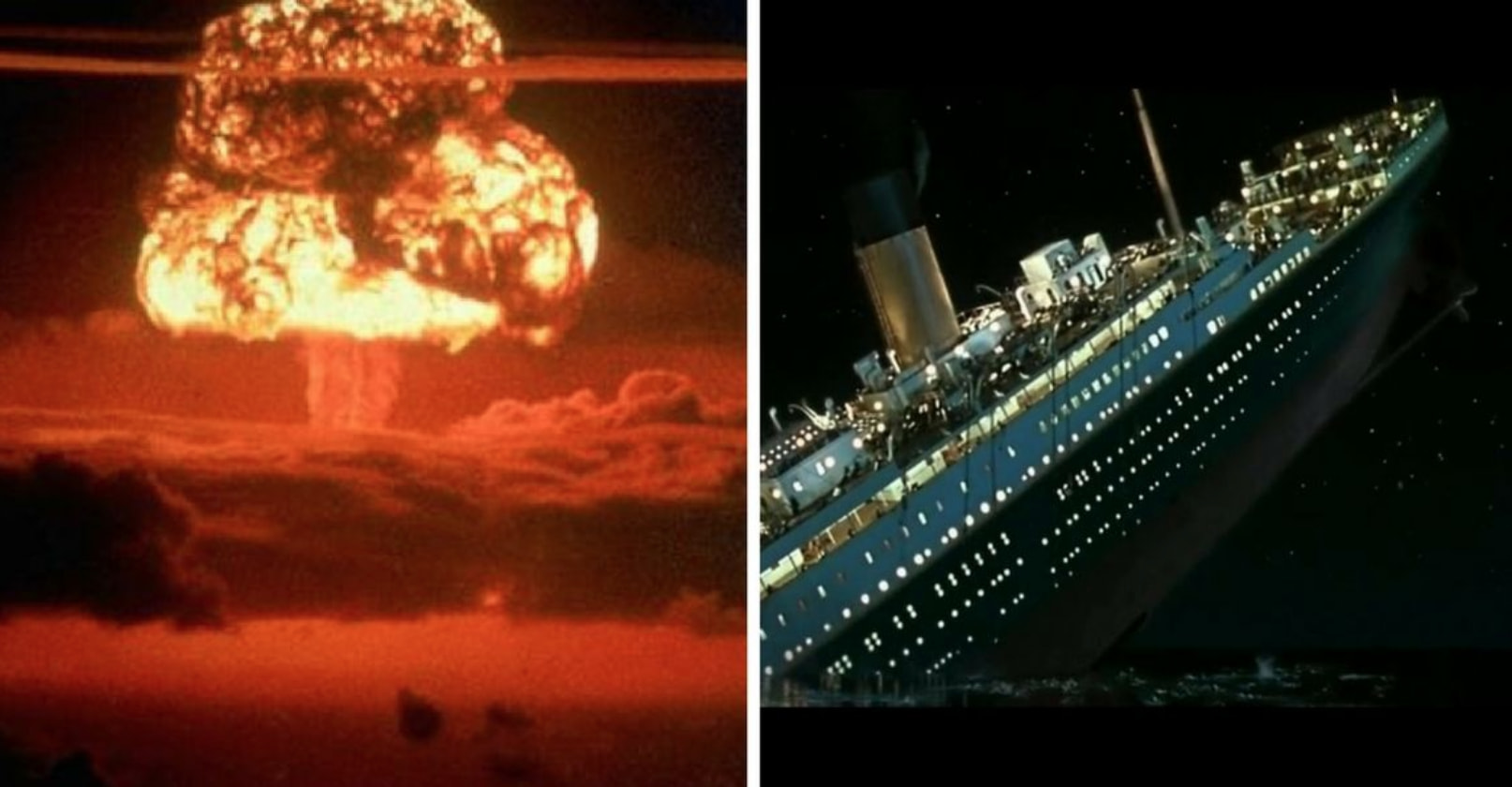 10+ Eerie Coincidences That Are Way Too Weird To Ignore
Some of these will probably make you say “WTF” out loud.

Creepy DIYs That'll Give You Nightmares
Cheap and easy projects that'll freak out your friends.
Advertisement
Read This Next

15 Creepy Abandoned Places No One Should Ever Visit Alone
Bring a friend!

15 Men Revealed The Creepiest Way A Woman Has Hit On Them
Proof that women can be just as creepy as men!

Haunted Dolls You Would Definitely Never Want to Play With

These dolls are even more terrifying than Barbie's body proportions!

10+ Eerie Coincidences That Are Way Too Weird To Ignore
Some of these will probably make you say “WTF” out loud.

Creepy DIYs That'll Give You Nightmares
Cheap and easy projects that'll freak out your friends.
Advertisement
You May Also Like

Abandoned Places That Are Too Scary To Visit, But People Still Do Anyway
Would you check out these creepy places?

Although many people will probably recognize Annabelle from her Hollywood make-over from hell, the real story is even more frightening. According to research done by Ed and Lorraine Warren (the same people who brought you those Amityville Horror nightmares) this doll is possessed.

Annabelle was given to Donna, a 28-year-old nursing student, by her mother who found the doll in a hobby store back in the '70s and thought "my adult daughter needs a 'roided up Raggedy Ann doll." Almost immediately after being gifted with the doll, Donna and her roommate reported that it would move throughout the day from room to room and cross and uncross its legs.

"Several times Donna, placing the doll on the couch before leaving for work, would return home to find the doll back in her room on the bed with the door closed," said the Warrens about the investigation.

Ultimately, the paranormal investigators deemed that the doll was possessed by a demon that used the little girl persona to trick people into trusting it.

Hailing from Key West, Florida, Robert the Doll is best known for inspiring the slasher icon Chuckie. Robert (the crazy possessed doll) came into being after the parents of Robert Eugene Otto (a young boy) were complete a-holes to a young Jamaican woman who worked as young Robert's nurse.

After being dismissed, the Jamaican woman gave Robert this horrific doll and went on her way. The doll and Robert were inseparable from then on, even bringing the doll with him into the bathroom during baths. However, the family began to note several strange happenings in their house after the doll's appearance. Namely, that glassware began to fly out of people's hands during meal times, and young Robert could be heard in his room talking to his doll, only to have a completely different voice answer him. Robert reported that the doll wanted him to hurt his family, even though he resisted.

Young Robert kept his doll into adulthood even though his parents were convinced the doll was evil. After Robert married, he would become violently angry whenever his doll wasn't facing the street from the attic he was kept in. There are even reports that Robert's family heard running footsteps coming from the attic where his doll was "playing."

Robert the Doll is now on display in Key West, if you're insane enough to pay him a visit.

3. The Hands Resist Him, also known as "The eBay Haunted Painting"

This haunting painting was created by Bill Stoneham in 1972, but is mostly known for the effect it has on anyone who owns it. After passing through the hands of actor John Marley, a couple from California posted it on eBay in 2000, with claims that the painting was cursed.

According to the couple, the characters in the painting move at night and that the doll depicted next to the boy gives off a threatening aura. Although it has not been confirmed or denied that this painting is haunted, the artist recalls that the owner of the gallery in which the painting was first displayed, and the art critic who reviewed it, died within one year of coming into contact with this creepy doll painting.

Sometimes in order to be a creepy doll all you have to do is witness some crazy crap. For example, Patty Reed's doll. Patty Reed was eight years old when she began traveling to California in 1846 with her family and other pioneers. They became known as the "Donner Party" after being trapped in a snowbound situation and forced to eat cloth, mice and eventually each other!

Thankfully, Patty and her family was able to survive the journey and lived their lives out in San Jose.

Now this doll serves as a reminder of what the Reed family went through and how terrifying a porcelain face can be.

Can you imagine having your family haunted by a cursed doll? Well, the family who got stuck with Joliet sure can! According to the family, Joliet was given to their great-great grandmother as a gift by a vengeful friend. Shortly after, she became pregnant with a son who died on his third day of life. Since then, every woman in the family has two girls and one son, the latter of which dies on the third day of life.

The doll is also said to emit baby boy's crying in the middle of the night, acting as a vessel for all the young souls that succumbed to the curse.

Made in England or Germany between 1910 and 1920 and donated to the Quesnel Museum in British Columbia in 1991, Mandy the Doll is quite the trouble maker. According to the person who donated the doll, cries would sound from the basement where she was kept and it was only until the former owner removed the doll from the home that the crying stopped.

Museum employees also ran into trouble with Mandy, recalling that items like pens and pencils would move from where they were placed, and that the doll has a penchant for messing with security cameras that are guarding her. Visitors to the museum claim that the doll blinks and her eyes follow you when you walk away.

In 1972, Kerry Walton decided to investigate an abandoned building that had frightened him as a child because why not? In the building he found this marionette, with a face that can only be the source of nightmares.

Walton still owns the doll to this day, but he believes it was created by a Romanian puppeteer 200 years ago after his son drowned. It is also believed that the soul of the son who unfortunately lost his life resides within the doll.

The doll is said to have a pulse at times, human hair, and many report feeling sad or scared when coming into the presence of it. On top of all this, animals are said to attempt to attack the doll whenever they're around it. Animals know what the hell is up when it comes to haunted dolls.

Jayne Harris, based in Shrewsbury, Shropshire, is a paranormal investigator who was given Peggy by her terrified former owner. After posting a video of a seance involving the doll, Harris received complaints from over 80 people who claimed they experienced nausea and chest-pain after watching the doll.

Harris believes that Peggy is possessed by an evil spirit and takes pleasure in harming others. One woman, who wished to remain anonymous, even suffered a heart attack after watching a video of Peggy. Are these people just extremely excitable or is something more sinister at work here?

The locals in Pulau Ubin have decided to worship this Barbie Doll as a sort of deity or god. If you went to the shrine known as Lady Na Tuk Kong Shrine, you'd find this Barbie surrounded with offerings from locals who wish to pay it respect.

According to legend, during World War I, the British came into the village in search of a German couple and their daughter. Although the couple was captured, the daughter was able to escape into the woods. Unfortunately, she ended up falling off a cliff and dying. The locals built the shelter in order to pacify the spirit of this young girl.

Now people come from all over the world to pray to the Barbie that holds the young girl's spirit and claim their prayers for health and safety have been answered by it.

Love creepy dolls? How about an entire island full of them?

If you answered yes to either of the above, then Isla De Las Munecas (or Island of Dolls) is just for you!Don Julian Santana Barrera was the sole inhabitant of the island for his life, and after a young girl living nearby drowned, he was the one to discover the body. Barrera recovered a doll from the scene of the drowning, and thus began his creepy new hobby.

He started collecting dolls and eventually the island was covered in them. People who visit the island at night claim they hear whispering from the dolls and that their eyes will follow you through the darkness.

This little lady is anything but small, standing at a dominating 16", Caroline was originally purchased at a Salem, Massachusetts antique shop. She is said to be possessed by the souls of three previous owners, all of whom battle for control over who can use her as a vessel.

Caroline has been known to whisper things into your ear if you hold her close enough and loves to move books around when others aren't looking.

Thankfully, Caroline seems pretty sweet as far as possessed dolls go, since she has never threatened to harm anyone before.

This puppet was given to Harris after it's previous owner claimed it choked him out while he was asleep. As if that weren't creepy enough, it was recently filmed moving in a box that encased it, which was blessed with holy water. Watch the video here and have fun never sleeping again.