A long time ago in a galaxy far, far away 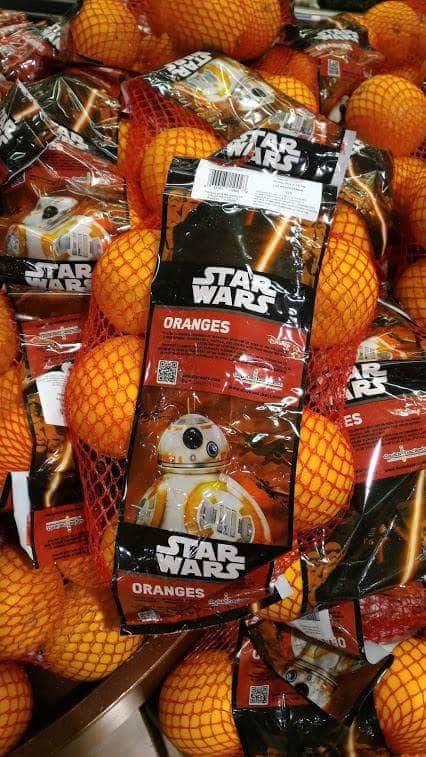 Alright, Disney, we get it: There's a new Star Wars filmcoming out. Star Wars:The Force Awakens opens in movietheaters around the world on Friday, December 18, and if you haven't seen any advertisement for the film, you probably haven't been outside in the past six months.

It has been 10 years since the last installment of thefranchise was released, and over 30 years since the original movie hit theaters. Suffice it to say, people are excited.Star Wars fans have been lining up outside the Chinese Theatre in Hollywood since Saturday, December 5, more than two weeks before the The Force Awakens will debut.

From bus stops to billboards, ads for the long-awaitedsequel are everywhere, but Disney is seriously starting to go overboard with the movie's merchandising. Star Wars oranges, really? We've got a bad feeling about this...

No matter how much we love Star Wars, do we actually need these product tie-ins?

It's common knowledge that all stormtroopers power their blasters with Duracell batteries. Not even the smartest engineers in the Star Wars universe were able to solve the galaxy's energy problems.

Those weren't tattoos on Darth Maul's face, they were carefully drawn mascara lines. No wonder he always spent so long in the bathroom...

An apple a day keeps the Sith lord away. Unless your name is Luke Skywalker.

The dark side of the coffee. Let the milk flow through you.

Fresh H2O from the free-flowing rivers of Tatooine. Make sure to bring a few bottles next time you head out into the desert.

Tasty, they are. Eat them, you must.

Not as clumsy or random as a blaster. An elegant utensil for a more civilized age.

These are not the discounts you're looking for. Go about your business.

Give yourself to the dark side. It is the only way you can save five minutes on your daily commute.

1
The Original 'Star Wars' Concept Art Will Take Your Breath Away
If "Star Wars" saga is director George Lucas' vision, then conceptual designer and illustrator Ralph McQuarrie was Lucas' eyes.

2
People Are Freaking Out Over This Immersive "Star Wars" Hotel Coming To Disney World
And they have good reason, too!

3
Disney Released The First Photos Of 'Star Wars Land' And People Are Freaking Out
You will too!
Advertisement
Read This Next

This Is What Star Wars World Will Look Like, According To Disney
Matt Manser | Travel

If Your Favorite Star Wars Characters Were Mexican Wrestlers
May the Fourth Be With You This Cinco de Mayo.

How Justin Bieber's Journey From Hated to Celebrated Mirrors the "Hero's Journey" From Star Wars
Justin Bieber is no Luke Skywalker, but he's certainly been through the hero's journey of separation, initiation and return.