Has Our Usage of Exclamation Points Gotten Out of Hand?

Is the way we use exclamation points in texts and emails the death of language or the birth of change? 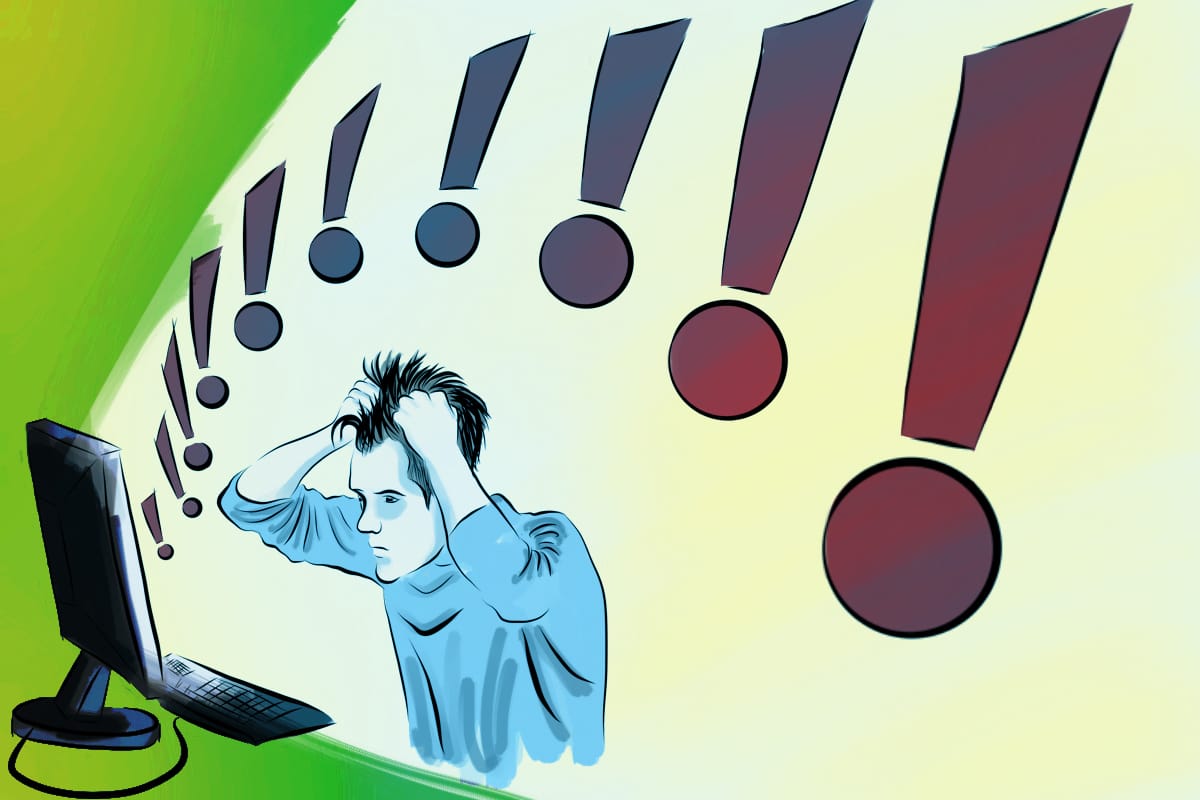 How are you?! Hope everything's great!!! I miss you soooooo much! I had to get a new computer because I broke the exclamation point key and when I used periods everyone thought I was mean! I'm not mean though!!!!!!!!!!!!!!!

Exclamation points seem to be sneaking into email at a rabid rate, and this makes people upset. Some never use them, claiming they make you sound crazy. Some use them way too much, asserting that they inject positivity into texts and emails. The history of the exclamation point and the English language as a whole can help us understand the varied and complex reasons for the increased use of the mark in text-based communication. Is our increased use of the exclamation point indicative of the grammatical rapture, or is it just a natural progression of the English language?

Everybody's emailing, all the time. Giphy

THE! EXCITING! HISTORY! OF! THE! EXCLAMATION! POINT!!!

Since the dawn of the written word, we've consistently experimented with punctuation to find what works best to clarify our intent. We're doing this now with the exclamation point.

The mark has a volatile past. Though the exact origin of the exclamation point is unknown, it is believed to have roots in the Latin "io," which means joy, and it was originally used solely to express, well, exclamations. Golly gee! Alas! Ahhh! And it wasn't until 1970 that the exclamation point had its own key on the keyboard. Before that, in the days of typewriters, you'd have to type a period, then backspace right over the period and type a straight line. It was way more trouble than it was worth.

These days it's much easier to type the little bugger, assuming your cat hasn't scratched out the "1" or the shift key. Still, there are F. Scott wannabes who take a hard stance against the cheery little Latin line-point combo. There's an entire blog called Excessive Exclamation!! devoted to calling out overuse of the mark in public spaces.

But as many authors and bloggers as there are discouraging the use of the exclamation point, there are just as many professionals who support its use or at least acknowledge that it's a "for-now-fix" to the real problem of email comprehension. In David Shipley and Will Schwalbe's 2007 book, Send: The Essential Guide to Email for Office and Home, they write, "'I'll see you at the conference' is a simple statement of fact. 'I'll see you at the conference!' lets your fellow conferee know that you're excited and pleased about the event ... `Thanks!!!!' is way friendlier than `Thanks'."

While tacking four exclamation points after "Thanks" may make you sound suspiciously grateful, there are real logical and historical reasons for the mark's seemingly sudden overabundance. Language is like a shark. It has to keep moving forward constantly. If it doesn't, it dies. Just look at Latin.

And all language. Giphy

OLD ENGLISH WAS BAD ENGLISH (NOT THE BAND)

Increased exclamation point use is simply another example of a development to our language. Sure, the fact that we're seeing its experimentation happen in real time (resistors and all) can seem troubling, but it's natural.

In Adrienne Raphel's article in The New Yorker, "A History of Punctuation for the Internet Age," she wrote, "In Old English manuscripts, punctuation is idiosyncratic; to denote word divisions, writers tried a variety of strategies: dots, spaces, `camel case' (that is, using capital letters rather than spaces ToMarkTheBeginningsOfNewWords)." We've always tried a bunch of stuff out! Some of it is totally dumb, doesn't work and eventually gets discarded. And that's OK.

The rise of printing did call for a standardized system of punctuation. But it wasn't like we were automatically handed a set of rules inscribed in stone, forever relevant and unchanging. People argue to this day about how to use or not use certain marks of punctuation. For example, the debate over the serial comma, also known as the Oxford comma, seems like it will never end (I like it and want to use it, but Guff doesn't, so here we are). And what image pops into your head when you hear the word octothorpe? How about pound symbol? Are we getting close with number sign? None of those are hashtag though, the now nearly universally understood name for this symbol: #.

Point is, the English language is a living, breathing organism. Since its inception, it has continually experienced changes. We learn what looks best, how people read and understand our marks and our spellings and adjust the rules as those perspectives develop.

YOU'VE GOT LOTS AND LOTS OF MAIL

As much as our language continually changes and evolves, the methods by which we communicate that language progress at an even more rapid rate. It may not seem like it, but email is a brand new mode of communication.

So we're collectively learning to navigate the complexities of this brand new method of text-based communication. This article by Joseph M. Saul from a 1996 issue of the University of Michigan's Information Technology Digest entitled, "E-Mail Etiquette: When and How to Communicate Electronically," is now adorable in the way it describes how people tried to inject emotion and intent into their emails at that time:

Experienced e-mail users have developed conventions for showing when they are joking "”     interjections such as "JK" or the use of "smileys," such as this:

(If you haven't seen one of these before, tip your head to the left to see the smile.)

Precious, isn't it? But it points to a major problem that's always been implicit in email communication. People use it for work, marketing campaigns, conversations with Grandma, financially supporting Nigerian princes. This is the problem with email: Whether you're writing a love note or a business email, both messages look the same.

The nature of text-based communication precludes several levels of understanding that are implicit in face-to-face conversation or even handwritten correspondence. So it's only natural that we adapt our language to better express ourselves in text. One of the ways in which we're accomplishing this is by shifting (OK fine, increasing) our use of the exclamation point.

But as we've seen, changes like this to our grammar and usage are on par with the development of our language throughout history. Raphel wrote in The New Yorker, "A 2007 Daily Mail article titled `I h8 txt msgs' had declared that `SMS vandals' were `pillaging our punctuation; savaging our sentences; raping our vocabulary.'" But in Inventing English, historical linguist, Seth Lerer, wrote, "This is, for now, our language ... and if we take liberties by writing on a screen or talking in face time rather than face-to-face, we are sustaining a tradition of a thousand years of re-inventing English."

WE'RE IN THE MIDST OF A PUNCTUATION REVOLUTION

In the current punctuation revolution, the exclamation point is on the front line!!!!

Panicking when new punctuation trends take hold and resorting to angry screaming are simply part of the process of determining which of these trends will stick. Even if the written word wasn't going through a massive transition with this shift to casual, immediate conversation, the rules of punctuation would continue to change. So the lesson here: Don't panic.

The fact that we're using more exclamation points in text-based communication doesn't mean that we are becoming illiterate or losing our sense of language. On the contrary, it actually indicates our heightened sensitivity to each and every mark we write or type. What's happening to punctuation today has been happening, in different ways, for centuries. We're in the midst of discovering the most effective, efficient ways to communicate our brilliant ideas to each other. Isn't it exciting?

Email may not be around forever, but text-based communication isn't going anywhere anytime soon. If anything, it's only going to get faster and easier. Go ahead and embrace the exclamation point! The OMGs, the WTFs, the hashtags and the ðŸ†, ðŸ˜‚ and ðŸ’©'s will all have places in our language's history, no matter how long they last in the lexicon.

So relax, and don't feel crazy when you read a period in a text as an affront or you put two exclamation points in an email. It's normal, all part of the process. Don't worry about it. Go live your life. Octothorpe (#) YOLO.

If Your Boyfriend Doesn't Text You Like This, You Deserve Better
Lindsey Gentile | Lifestyle

1
The Real Reason She Never Texts You First
Sometimes it is just because she is busy.

2
If Your Boyfriend Doesn't Text You Like This, You Deserve Better
It's better to be single than to date someone who isn't worth it.

3
Every Parent Needs To Know This Dangerous Texting Slang
You need to keep up with your kids to keep them safe.
Advertisement
Read This Next

Some of the Most Clever Use of Emojis
Matt Manser | Funny

The Worst Ex Girlfriends In The World
Chet | Funny

Most Epic Autocorrects
Chet | Funny
You May Also Like

Smiley Face and Thumbs Up at These Emoji Tattoos
Flamenco lady into a high five (or prayer hands?) and a happy poo with these emoji tattoos!

Times Autocorrect Had Disastrous Consequences
Because one person's embarrassing text is another person's treasure.

Signs He's Into You
He may want to be more than just friends, but how can you tell?