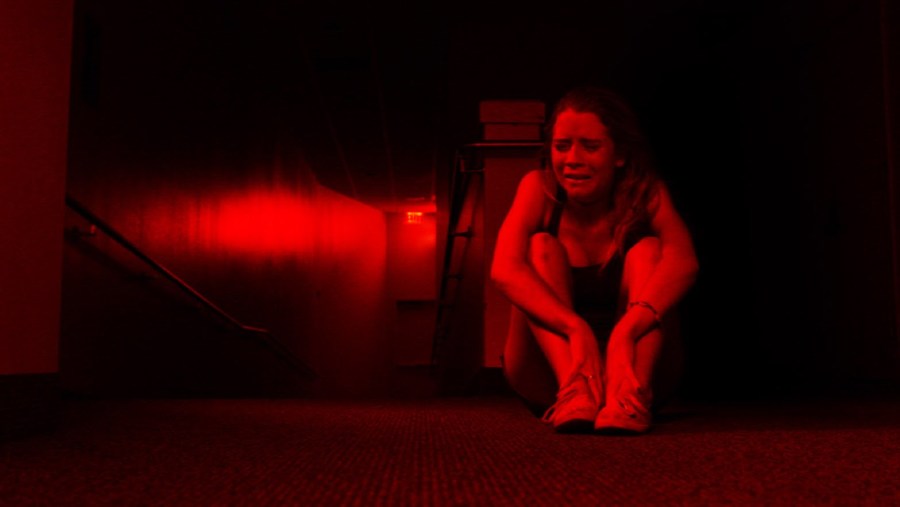 The Gallows starts with home video footage supposedly recovered by the Beatrice, Nebraska Police Department. It's 1993, and a high school production of a play called The Gallows is underway when the floor accidentally gives out, actually hanging and killing student actor, Charlie Grimille. Twenty years later, memories of the gruesome accident resurface when the school's drama class decides to put on a production of The Gallows once again.

Reese Houser (Reese Mishier"”each main actor keeps his/her first name) is the former jock/current lead of the play, and he's hopelessly in love with the play's main actress, Pfeifer Ross (Pfeifer Brown). In a moment of poor judgement, he agrees to sneak into the school at night to destroy the set to avoid doing the play. This genius plan is the bright idea of bro-y bro Ryan (Ryan Shoos), who's also conveniently currently shooting his entire life with a handheld camera. Ryan's girlfriend, cheerleader Cassidy (Cassidy Gifford), and Pfeifer, who arrives after seeing Reese's car parked outside, join them, and the four students find themselves locked in the auditorium at the mercy of the angry hangman spirit of Charlie Grimille.

Since The Phantom of the Opera, we've been spooked by backstage theater lurkers"”it's an effective setting and a twist on an old tale. Plus, who wants to be at school when you don't have to be there?! That in itself is terrifying.

The found footage genre of horror has obvious benefits: it's massively cheap and has that unsettling shaky cam work built in. While the sub-genre has gotten a lot of flack recently, there's no doubt it still resonates with theatergoers, and The Gallows only proved this as a rule. Made for a measly $100,000, it pulled in an impressive $38.2 million at the box office. Low budget horror is where it's at, folks.

The special features include the original version of the film, made for next to nothing and shopped around by young writer/director team, Chris Lofing and Travis Cluff. It's interesting to see how the film evolves with increased studio participation. In another special feature, an interview with Jason Blum, Lofing and Cluff describe their backgrounds and their career trajectories, and you realize The Gallows was a tiny movie that found its way into the right hands at Blumhouse Productions and New Line Cinema. It's an encouraging story for aspiring and emerging filmmakers. The Gallows feels like, and essentially is, an independently produced little horror movie with unknown actors and very few, if any, special effects, that made it onto the really big screen, with a nationwide theatrical release, and was quite a success. It has big heart"”dedicated filmmakers and actors doing big things with not a whole lot. The Gallows is a lesson for all those trying to make it in film: Just hang in there.

1
Here's What Your Favorite Horror Movie Villains Look Like In Real Life
They look like...real people?

2
15 Haunting Documentaries Scarier Than Any Horror Movie
Truth can be scarier than fiction.

3
These Two-Sentence Horror Stories Will Give You Chills
You probably won't be able to sleep after reading these.
Advertisement
Read This Next

Netflix and Un-Chill: The Creepiest Documentaries You Can Stream Now
Shawn Binder | Lifestyle

Love Hurts! Couples That Committed Horrific and Gruesome Crimes
Shawn Binder | News
You May Also Like

Netflix and Un-Chill: The Creepiest Documentaries You Can Stream Now
We're bringing the horror right into your home.