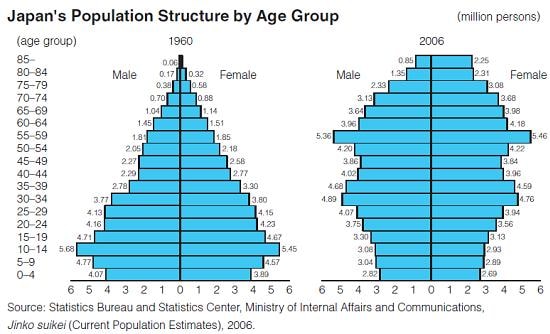 Declining populations often bring to mind images of war-torn areas beset by a host of barriers to safe and dependable living, sometimes even inadequate supplies of clean water or food. However, the nation with the world's largest negative population growth rate is Japan, one of the most developed places on the planet. According to most estimates, Japan is on track to lose half of its population within the next 100 years "” a truly incredible statistic. Currently, the country has the highest percentage of people over the age of 65, as well as the lowest percentage of people under 15, of any nation on earth. The repercussions of this phenomenon are vast and disturbing, but its bears investigation as well.

Japan is losing people for a number of reasons. Chief among them are economic factors. According to the Economist, a third of Japanese women want to become housewives, but many are stymied by the impossibility of finding a man who can support an entire household in today's market. Meanwhile, as rural flight continues, many towns risk losing all of their young women to the big cities. As a result of changing gender roles in a globalized economy, men and women are putting off marriage, and many choose not to wed at all. Thanks to Japan's strict traditional customs, only 2% of babies are born outside of marriages, about 5-10% as much as other rich countries. 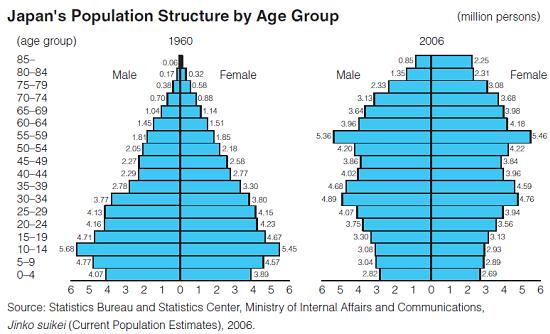 So what is occuring is a consumer culture that allows individuals to compartmentalize the needs that relationships typically fulfill "” intimacy, sexuality, conversation, etc. "” by spending money. In other words: there are some very funny things going on in Japan.

Take host and hostess clubs as an example. Typically reserved for Japanese nationals, these swanky bars are places where men and women can pay hundreds of dollars an hour for the chance to talk to attractive members of the opposite sex. Yes, just to talk. Many individuals who frequent these bars report enjoying the attention heaped on them by their respective "host" or "hostess." These bars earn most of their money from repeat customers, and promoters often stand out front aggressively pitching their wares to wealthy men and women while ignoring those who look like they won't stay for long. At the end of the night, many customers feel satisfied, at least in regards to their need for intellectual stimulation and an ego boost, without the messiness of an actual human relationship. 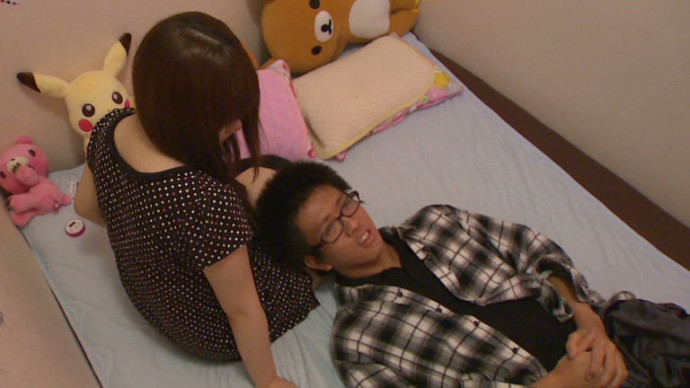 A similar phenomenon is the cuddle cafe. Isolated individuals have been offering cuddling services through online sites throughout the Western world for some time now, but it wasn't until 2012 that a physical establishment opened its doors to those needing the warmth of another body. Japan's cuddle café, advertised as a "co-sleeping specialty shop," allows customers to sleep with (and only sleep) with beautiful women. The menu is extensive, and admission alone will set you back about $25. Options start with a 20 minute nap and range up to 10 hours, or a very full night's rest. Prices vary considerably, with the lowest option fetching about $40 and the highest commanding the hefty price of $400. In addition to napping, customers can order delights ranging from "girl pats customer on the back" to "girl sleeps with head on customers' lap."

Now, you don't have to travel to Japan to find a cuddle cafe. Shops have opened up in Western cities like New York, Vancouver and Portland. While many react to the cuddle cafes with distaste, comparing them to prostitution, the shops maintain that no sexual acts will be tolerated. Perhaps prostitution isn't the best comparison. This industry is about assembly line relationships, feeding the need for human interaction one bit at a time.

Thus, these phenomena are rightly understood in conjunction with the traditional sex industry, although they do not offer anything resembling sex work. Nonetheless, both cases are instances of individuals who are unable (or unwilling) to find a necessary personal element in a non-economic space, turning to the free market in order to find satisfaction. In the meantime, the life generated by humans in harmony withers. If only the cavemen could see us now. 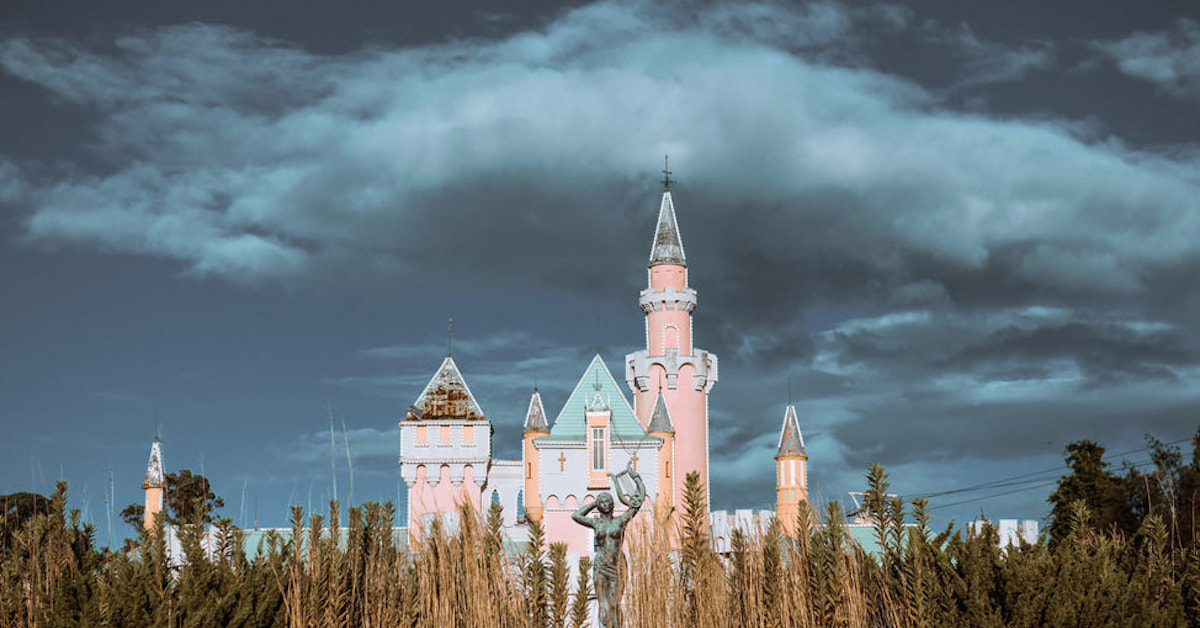 Japan's 'Nara Dreamland' Tried To Copy Disneyland, But Instead Turned Into An Abandoned And Terrifying Wasteland
Lilyanne Rice | Pop Culture

1
Japan's 'Nara Dreamland' Tried To Copy Disneyland, But Instead Turned Into An Abandoned And Terrifying Wasteland
But you'd still want to ride that rollercoaster, right? Well, ya can't.

3
Why 'Dragon Ball Super' Is Better Than 'Dragon Ball Z'
'Dragon Ball' is back and, dare I say, it's better than ever.
Advertisement
Read This Next

Japan's Wisteria Festival Is Straight Up Magical AF
For one month, Japan is transformed into a fairy land.

Robots Sent To Clean Up Fukushima Nuclear Disaster Keep Dying
The struggle is real — even for robots.

Phones In Japan Are Required To Be Waterproof For An Interesting Reason
Japanese women are taking bathroom selfies to a whole new level.