We were kind of shocked. We were laughing about it. 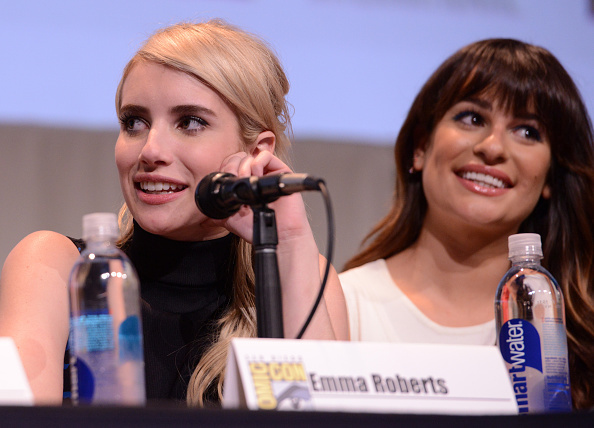 Glee and American Horror Story creator Ryan Murphy is combining both of his genres in the new Fox horror-comedy Scream Queens. If only it was a musical too, but at least he got the ultimate scream queen, Jamie Lee Curtis, to bring the show credibility. She stars, passing the torch to a new generation of scream queens that includes Emma Roberts and Lea Michele.

Guff sat at the table with Roberts and Michele at Comic-Con where they premiered the first episode of series. The show is set in a sorority, the classic setting of many `80s slasher movies, with these modern girls facing a killer.

Q: What has it been like to have the ultimate scream queen, Jamie Lee Curtis, as the den mother of this cast?

Lea Michele: Books, juices. But more than that, just feeling like there's such a supportive [person]. She's like the main structure that just keeps everything together. Even being in a place like this, yesterday she stood in front of all the cameras and she was like, "This is not a flattering photo for these women." She's like our protector and I really love that. I feel like being part of a show and having someone that does that for us is unbelievable. And she's f&$!ing Jamie Lee Curtis.

ER: So there's that.

Q: What I love about horror movies is they're about the survivors, and the survivors aren't who you might think they'll be. It's not usually the big strong guy. It's usually a girl, and the girl who's ignored who no one thought of who has the strength to survive. Was that significant to you?

ER: I think we all kind of just went into it. I don't think we really knew that people were going to solidly die each episode. We were kind of like, "Oh, every couple episodes, someone will die and it's not going to be us." Then Ryan's like, "No, someone's going to die every week and none of you are safe." We were kind of shocked. We were laughing about it. We're like, "What do you mean? We thought we were not going to die." So all of us are as in the dark as you guys, because Ryan will not tell us.

LM: Yeah, he won't tell us but it's so great too because Ryan's always so smart with adding all the important elements to a show. It's funny, it's scary but it also has that kind of girl power thing about the show. When he pitched the show to me, I had zero information but the more we talked, certain things that he was saying about what was important about the show, and it goes back to you saying at the end maybe it'll be us girls who survive and take this killer down. I love that and I love that Ryan always keeps that in mind, that it'll be a positive show.

Q: What are you loving about this show?

LM: For me personally, I've always loved their writing and I've always loved being a part of something that's so fresh and new. I had the same experience with Glee. I'm so excited to be playing a character that they're challenging me so much and that's incredible. But I'm also so grateful to be working with such a strong group of actors who have such established careers and talents. That's just so great to work with other people that are so wonderful.

ER: For me, I've known Ryan Murphy for a long time because he's friends with my Aunt and I've known him just through the business but then I always wanted to be on a Ryan Murphy show. I was like, "I want to be on American Horror Story more than anything." I didn't even ask him about it. One day he called me and I was like, "I didn't even ask you because I just didn't think there would be a role for me." And he's like, "No, I have a role for you." And also to work with someone like him who's a guy who can write for women so well and makes us smart and articulate and funny. The show is mostly young women and Jamie Lee Curtis's role is amazing. It's just really cool to be able to trust someone like him to make all of us girls look good and to know that you're going to have a badass role. That's how I felt on Coven. It was so fun on Coven because literally he just made us all badass. It was really awesome. I love the experience.

Q: Lea, how elaborate is the contraption you're wearing on the show?

LM: It's pretty intense, I will say. At first, I was like, "Oh, this is nothing. I can totally do this." It's definitely very intense, especially late nights and then you're just like, "Oh my God." But I know how to take it off within .2 seconds.

Q: Do you like horror films or do they scare you?

ER: My friends won't even watch horror movies with me anymore. They won't invite me to see them because they're like, "One of us will have to sleep over at Emma's house if we take her to watch the movie." I'm like, "You guys..." They're like, "We're not seeing The Conjuring because you will make us move in." I was like, "Okay, true, true." The trailer scared me.

LM: It's so scary. For me it's like the opposite. My girlfriends are like, "If we come over to your house, we're not watching a scary movie with you" because they don't want to. "If we go on a weekend trip together, you can't make us watch." I literally search Apple trailers to see what new horror films are coming out and what can scare me, because it's very hard to.

Q: What are some horror movies that did scare you?

LM: Really? That one got you?

Q: It is really scary even though it's rated PG.

ER: I still check under the bed every night.

LM: You think that Mischa Barton's underneath it?

ER: And it takes five minutes to get the courage up too. The most recent movie that was super scary was The Conjuring but in year's past, obviously The Ring but The Strangers, man. The Strangers, no. That was really scary.

Q: Emma, has your character done something to reap the retribution of this killer?

ER: I am the president of the sorority and I'm sure there are plenty of people I've pissed off enough to go on a killing spree. You know what I love about the show is you don't really know who's good and who's bad. Everyone has kind of done something that is bad and everyone has shades of good, but everyone has that darkness. There's always that little twinkle of darkness in everyone's eye and I genuinely don't know who the killer is, and I'm annoyed that they won't tell me.