15 Of The Grossest Things People Have Found In Their Food

You may not want to be eating during this.

Tasty Bites That Will Have You Singing 'Food, Glorious Food'
We challenge you to look at this list and say you've seen it all before.

Uniquely Awesome Food Items For The Foodie In All Of Us
If all else fails, there is always food.
Advertisement
Read This Next 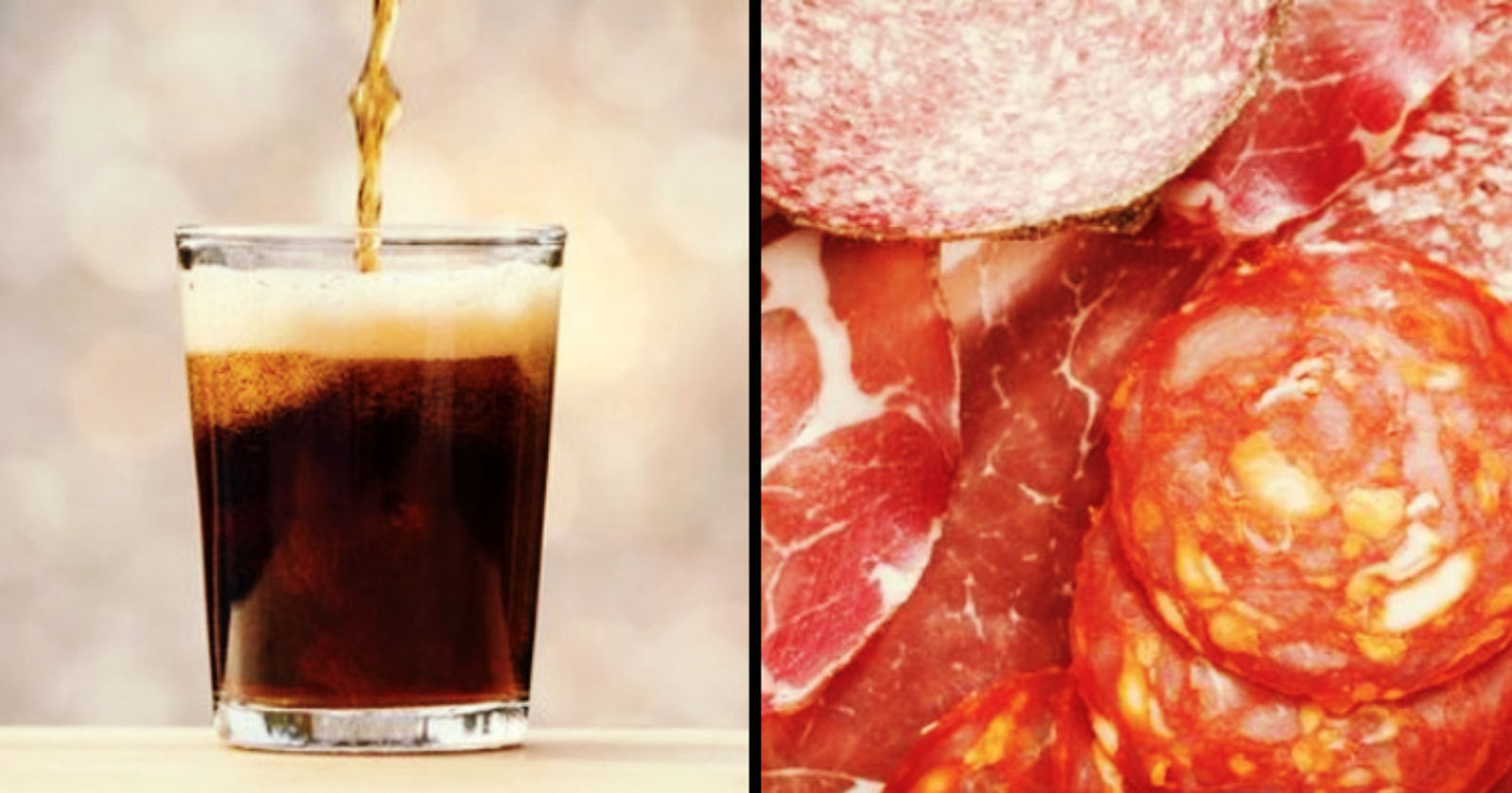 Things You Can Do With Bacon Grease That'll Make Your Life Better
Who knew something so unhealthy could be so useful?

Some Bizarre Foods That You Won't Believe People Actually Ate In The 1950s
People back then REALLY liked Jell-O...

15 Of The Grossest Things People Have Found In Their Food

You may not want to be eating during this.

Tasty Bites That Will Have You Singing 'Food, Glorious Food'
We challenge you to look at this list and say you've seen it all before.

Uniquely Awesome Food Items For The Foodie In All Of Us
If all else fails, there is always food.
Advertisement
You May Also Like

15 Cooking Tricks They Only Teach You In Culinary School
From amateur to sous chef in no-time.

Nutritionists Revealed The 16 Foods They'll Never Touch
Trust the health nuts on this one, folks.
Advertisement

Just a heads up: McDonalds is not doing well on this list. Four years ago, this guy posted the above picture on Reddit, saying, “I was eating a hash brown from McDonald’s on the way home from work when I felt something on the bottom.”

The cockroach probably added an extra crunch to that hash brown. Besides, in some countries eating insects is considered a delicacy.

2. Ants In A Breakfast Burrito

McDonalds, seriously, get your s**t together. In 2010, an Ontario man claims that he found 50 dead ants in his McDonald’s breakfast burrito. Tommy Lam, the ant victim, is a little emotional scarred from the incident.

“When I think of it, it grosses me out,” he said. “Just bringing back the bad memories.”

In 2015, a 12-year-old girl from the UK found eight “lumps” with “brown heads.” in Morrison’s Boil-in-the-bBag rice. The girl’s family was even more horrified when they realized that they already ate three bags out of the box.

Honestly, I get why they went through three bags without noticing. Those sneaky maggots camouflage pretty well among the grains of rice.

Well, this is only slightly terrifying. This little guy was found in a bag of sealed bananas in a grocery store in Cornwall, England. The amazing thing is that this thing survived a 5,000-mile journey from Costa Rica. At least this story has a happy ending. The little guy wasn’t squashed. Instead, the black-edged scorpion was placed in the tropical house at the  Newquay Zoo.

This is one reason why you may want to go gluten-free. In 2010, a man from Oxfordshire in the UK found a dead mouse baked, and then sliced, into a loaf of bread as he was making sandwiches for his kids. The food production company, Primer Foods, was forced to pay a fine of almost $21,000.

6. Tongue-Eating Parasite In A Sea Bass

You can tell everyone you don’t eat fish because of the mercury, but really, it’s because of this tiny demon. In 2014, a 62-year-old from South Wales found this tongue-eating parasite in a sea bass he purchased from Morrisons (second time on the list, guys). The parasite, cymothoa exigua, actually eats the fishes tongue, attaches itself to the base and then acts as the tongue.

In 2015, a woman from Pennsylvania found a black widow spider in a bag of grapes she purchased from BJ’s Superstore. Being that it was BJ's, I wonder if the black widows could be purchased in bulk. Anyway, good thing she spotted it. This woman is a mother of six and a black widow bite can potentially be fatal in young children and the elderly.

Was this sandwich made special-order for someone in prison? I didn’t realize that Subway was in the shank business. A man from New York City was shocked when he bit into a Subway sandwich and found a 7-inch serrated blade. A distracted employee probably folded the knife into the sandwich while they were preparing it. The blade was then baked into the sandwich. Lucky for this guy, he didn’t bite into it on the blade end.

This is actually kind of a cute one. [Editor's note: No, it's not.] A woman in England found a live frog in a bag of mixed greens she got from a local supermarket. The woman ate some of the salad before noticing the frog. She said she felt “repulsed” after discovering the little guy. Such harsh words. She then put him back in the fridge for another night before bringing it back to the store in the morning. That’s pretty cold of her.

Ice cream so good it’ll make your mouth bleed! In 2011, a woman sat down with a pint of Walmart’s Peanut Butter Stars Ice Cream and found a bloody surprise. She ended up finding a bit of broken razor blade in the pint. Walmart’s response?

“I’m sorry, I hope your day gets better.”

I’ve heard that eating a lot of sweets can cause tooth decay, but I’ve never heard that cheese can make someone’s tooth fall out. A woman in the UK was shocked when she sat down to enjoy some Wensleydale Jervaulx Bluet and someone’s tooth fell out of a slice. She thought that it might have been her own tooth at first, and even took the tooth to the dentist who confirmed that it belonged to someone else.

After reading this list, you may never want to eat at McDonalds again. Another gross thing happened at the chain fast food restaurant. A student from the University of Illinois apparently discovered a bloody band-aid in her McDonalds French fries. This is extremely disappointing, cause McDonalds’ French fries are really f***ing good.

Well, at least this discovery was part of the animal this woman was eating in the first place. Again, McDonalds is the culprit behind this gross discovery. In 2008, a woman discovered a fried chicken head in a box of McDonald’s wings. Wait, McDonalds made wings? Anyway, the woman lost her appetite and said that, “I will probably cook at home from now on.”

This one is not only gross, but it is pretty disturbing. A woman in Brooklyn had been feeding her infant son a jar of the baby food when she made the terrifying discovery.

“I saw he was spitting it out,” the woman said. “He had blood on his tongue. I figured he had bitten himself. I picked up another spoon of the baby food. That’s when I saw glass inside the jar.”

This was also not an isolated incident. Thirty states actually reported finding glass in the Gerber baby food. F.D.A inspectors also found glass in 21 of the 137 recalled jars of baby food.

Wow. Someone, if not several people, deserved to be fired for this one.

Out of everything gross to find in your food, it’s pretty fitting to find a condom in a burger that is literally called a “Big Mac.” Anyway, back in 1997 a man named William Smith visited the fast food restaurant and ordered two Big Macs. He finished the first, and as he bit into the second he said that he tasted something strange. He went up to the manager and presented her with the disturbing find.

“The manager observed the condom, which had deteriorated on the sandwich when it was microwaved, turned and went to the back of the building, where Smith could see her, and called seven different guys out.”

Mmm … nothing like microwaved rubbers. That’s why he should have gone to Wendy’s, their meat is fresh, never frozen.

He ended up suing them in civil court but the judge dismissed the case.

Come on Mickey D's, don't make us go to Burger King because of this list.