The concept of Satanism is a tough pill to swallow, but it's definitely not what you think it is. 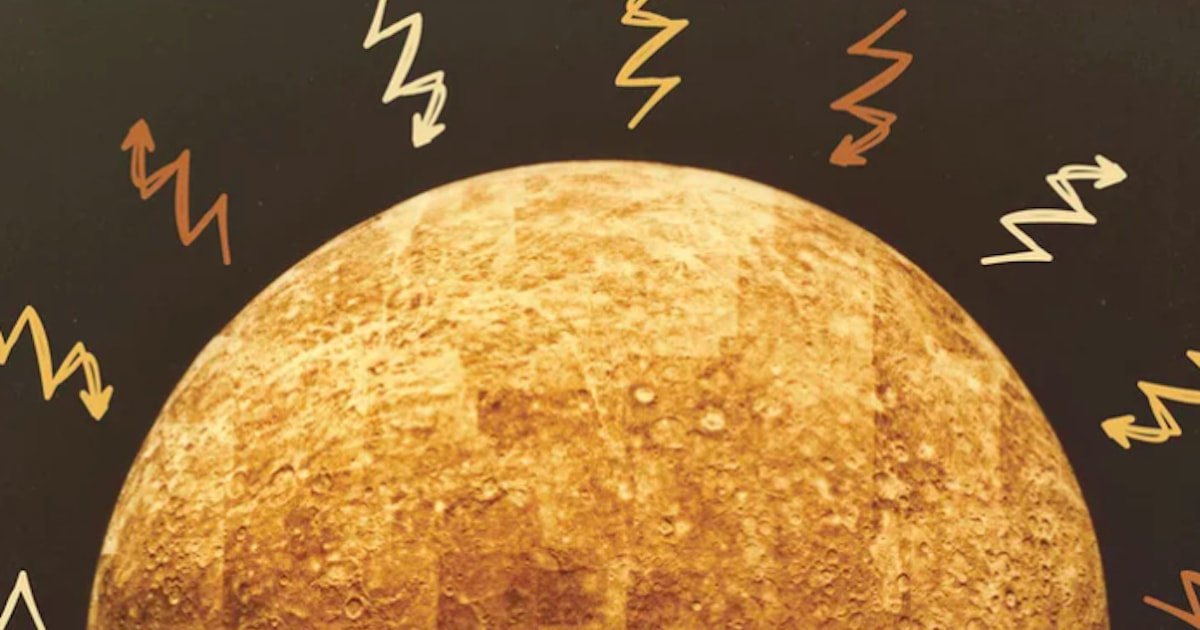 The Last Mercury Retrograde Of 2017 Has Arrived In Time For The Holidays. Here's How To Survive It
You’re going to have to say no to some exciting things.

15 Times The Holidays Brought Out People's Best Side
The holidays bring out the best in people.
Advertisement
Read This Next

This Woman Came Up With The Perfect Holiday Response For Her Homophobic Neighbor
Want to know how to put a homophobic neighbor in their place this holiday season? This lady had the perfect, most sassy solution.

This Is How Your Favorite Disney Characters Celebrated Halloween
Halloween is always a magical time, and nobody does magic better than Disney.

The concept of Satanism is a tough pill to swallow, but it's definitely not what you think it is.

The Last Mercury Retrograde Of 2017 Has Arrived In Time For The Holidays. Here's How To Survive It
You’re going to have to say no to some exciting things.

15 Times The Holidays Brought Out People's Best Side
The holidays bring out the best in people.
Advertisement
You May Also Like

People Reveal The Heartbreaking Reason They Won’t Go Home For The Holidays
Keep in mind that not everyone has the luxury of a supportive family during the holiday season.

10 Ways To Relieve Holiday Stress
Is your holiday anxiety already kicking in? We're here for you.

15 Thanksgiving Hacks You'll Be Super Grateful For
Let's give thanks to all these great food hacks.
Advertisement

1. Christmas and Satan? What's the Connection?

Media Source
Last week a Christmas nativity scene to be displayed on the lawn of the Michigan Capitol building was put on hold as the local Satanist group erected their own display (shown above) in response. A member of the Michigan State Capitol Commission, John Truscott, confirmed the Satanic group's right to exercise their freedom of expression.
Scared that these devil worshiping maniacs are going to ruin Christmas or worse? Well, fear not. True Satanists are not out to sacrifice your yule log and pair of chestnuts to the god of the underworld. Here's actually what LaVeyan Satanists are all about:
Advertisement

2. Putting the Satan in Satanism

Media Source
Though the Church bears his name, LeVeyan Satanists do not actually worship Satan. Satanists use the horned, hoofed, red-skinned reject from Heaven as a literary figure, a symbol of "pride, liberty, and individualism." They don't even believe the red guy exists. They think of him the same way you might think of Superman.
Advertisement

The Church of Satan was established in 1966. Its founder, Anton LaVey,  published the Satanic Bible in 1969, and preached a gospel that was at once accepting of rational thought combined with a practicing belief in the magical realm, and a rejection of prevailing Judeo-Christian morals and conventions. It was to be a philosophical religion dedicated to the celebration of the material world, the body, and, above all, the self. It's a self-ebration.
Advertisement

Media Source
LaVey outlined several (voluntary) rituals in his Satanic Rituals that were to be practiced as part of carrying out the religion. These were mostly formal rituals, and did not involve sacrifice, or communication with a deity (as LaVeyan Satanism was strictly atheistic). The rituals fall into one of three categories, depending on the sought after outcome: to bring about Compassion, to expel unrequited Lustful desires, and to Destroy any contempt for someone who has wronged you.
Rituals are a way to orchestrate what LaVey called psychodrama, which is basically the focusing of internal, emotional and intellectual energies towards a goal. Some of the rituals LaVey includes in his book The Satanic Rituals are the Black Mass, the Ceremony of the Stifling Air (which involves a symbolic rebirth from a coffin and repudiation of Christian values), the Das Tierdrama (which has participants acting as animals), and others.
Advertisement

Media Source
The 9 Satanic Statements are all attributes of the symbolic Satan that Satanists agree with and wish to enact in their own lives. Those are
Advertisement

Media Source
LaVey also laid down a 5-point program that is supposed to bring about a kind of Satanic utopia on earth. LaVey requires all initiates to Satanism to accept the 5-point program. In a few words, those points are:
Advertisement

Media Source
If you're not sure how to be a good person, don't fret. LaVey's Satanism hands down 11 rules. Here they are:
Advertisement

8. The 9 Sins of Satanism (Like Nothing You've Heard Before)

Media Source
Every religion needs to make its sins explicit so that its devotees know what they can and can't do. Satanism is no different, and LaVey chose nine, count 'em, nine sins. They're nothing like the seven deadly sins we've come to love. Check it out:
Stupidity: this is by far the most offensive transgression against Satanism possible. It's not so much being a numb-nuts, but someone who is so submissive to the herd mentality he or she accepts everything at face value and without questioning it. What a numb-nuts.
Pretentiousness: Basically, you can't be a hipster. Be yourself, not some idea of yourself, or some pie-in-the-sky character you've invented.
Solipsism: This is the idea that you are the center of the universe, and that all others should bow to your greatness. Don't expect them to, because they've got their own lives to take care of.
Self-Deceit: Don't delude yourself. Open your eyes. Keep it real.
Conforming to the Herd: Only submit to the herd if you can benefit by it. Otherwise, go rogue. Choose a master with discretion, not necessity
Lack of Perspective: Take off the blinders. Use your powers of introspection and awareness to separate true from false. Never stop watching.
Forgetfulness of Past Orthodoxies: If it looks like a duck, and quacks like a duck, don't be fooled: it really is a duck. What this means is that old conventions or religious ideas sometimes get packaged to look more appealing, and can thus trick Satanists into abandoning their independence. Don't let this happen.
Counterproductive Pride: Okay, so I lied. Pride is on here, and that's one of the seven deadly sins. Pride only becomes counterproductive if it's always followed by a fall. No fall, no foul.
Lack of Aesthetics: Don't reject what's beautiful. Deciding what is beautiful is a form of self-expression, and this shouldn't be shied away from.
Advertisement

Media Source
The Satanic grotto was initially a means for Satanists in close to each other to hang out and do Satanic stuff. The Internet has revolutionized the grotto system, and now much of the convening takes place online. Grotto masters, the leaders of a grotto, must receive special permission from the Church of Satan before holding their meetings.
Grottos fall into either a first or second level category. First level grottos are like amateur hour: it's a place where newbies can get some information on the Church, attend lectures, enjoy a LaVey study group, and do beginner stuff. Second level grottos are where things get a little spicy, and where rituals, parties, and cultural projects go down. You definitely want to get into level two grottos ASAP. Unless your under 18 — you've got to be 18 or older to join.
Advertisement

Media Source
Magic is basically the power to change earthly phenomenon to suit the magician's will, and LaVey distinguishes between two types of magic in The Book of Belial in The Satanic Bible: lesser and greater magic. Lesser magic takes advantage of one's powers of manipulation and also relies heavily on the situation in which the Satanist finds him or herself in. It is also restricted to sexual seduction, gaining someone's favor or sentiment, and inspiring those around with wonder or awe. It's kind of like How to Win Friends and Influence People.
Greater magic requires the execution of a Satanic ritual, and is used to enact taller orders. In a ritual, it's critical that all those involved suspend their disbelief, and fully allow the magical element to come to fruition. Rituals will vary according to the desired outcome, and can involve the sacrifice of effigies, various lewd acts, and crying. Lots and lots of crying.
Advertisement

Media Source
Looking for the Church of Satan's official chat room? Don't bother, they don't have one. In fact, they're very emphatic about the fact that they don't have one. They don't want you checking out any of those unofficial chat rooms either, because they feel it promotes splintering and infighting. Just attend your Level One or Level Two Satanic meetings, why don't you, and forget all about those impostor chat rooms.
Advertisement

12. Church of Satan is Youth Friendly

Media Source
Is it a surprise that youths of today are interested in the Church of Satan? Well, tough luck for them, but the official body strongly prohibits the use of mind-altering substances in any of its practices and broadly discourages the use of them altogether. Children of any age can register as members of the Church, but the possibilities for involvement greatly expand at 18. The Church encourages youngins to educate themselves of the practice before joining, and reading The Satanic Bible as a preliminary piece of literature. For those kids that feel like they can't show their true Satanic colors until they're legal minors, the Church assures them that "All you have to do to be a real Satanist is start living like one." You can even by your wee ones The Satanic Children's Big Book of Activities for Christmas. Just in time!
Advertisement

13. Common Misconceptions about the Church of Satan

Media Source
When you put Satan in the name of your religion, you're going to get more than stares. You're probably going to be the recipient of some hateful rumors and speculation. Comes with the territory. The Church of Satan has been accused of advocating for harm to animals, mistreatment of children, all kinds of freaky or illicit bedroom activity, and drug use. It's not that these practices have been perpetrated by people claiming to be Satanists, they have. It's that LaVey, father of the official Church, sternly condemned any of this behavior, and deemed it counter to all of Satanism's tenets. But, like in any religion, you're going to have extremists and bastardizers giving the group a bad (or worse) name. Again, hard to drag Satan's name through more mud, but that hasn't stopped people from trying!
Advertisement